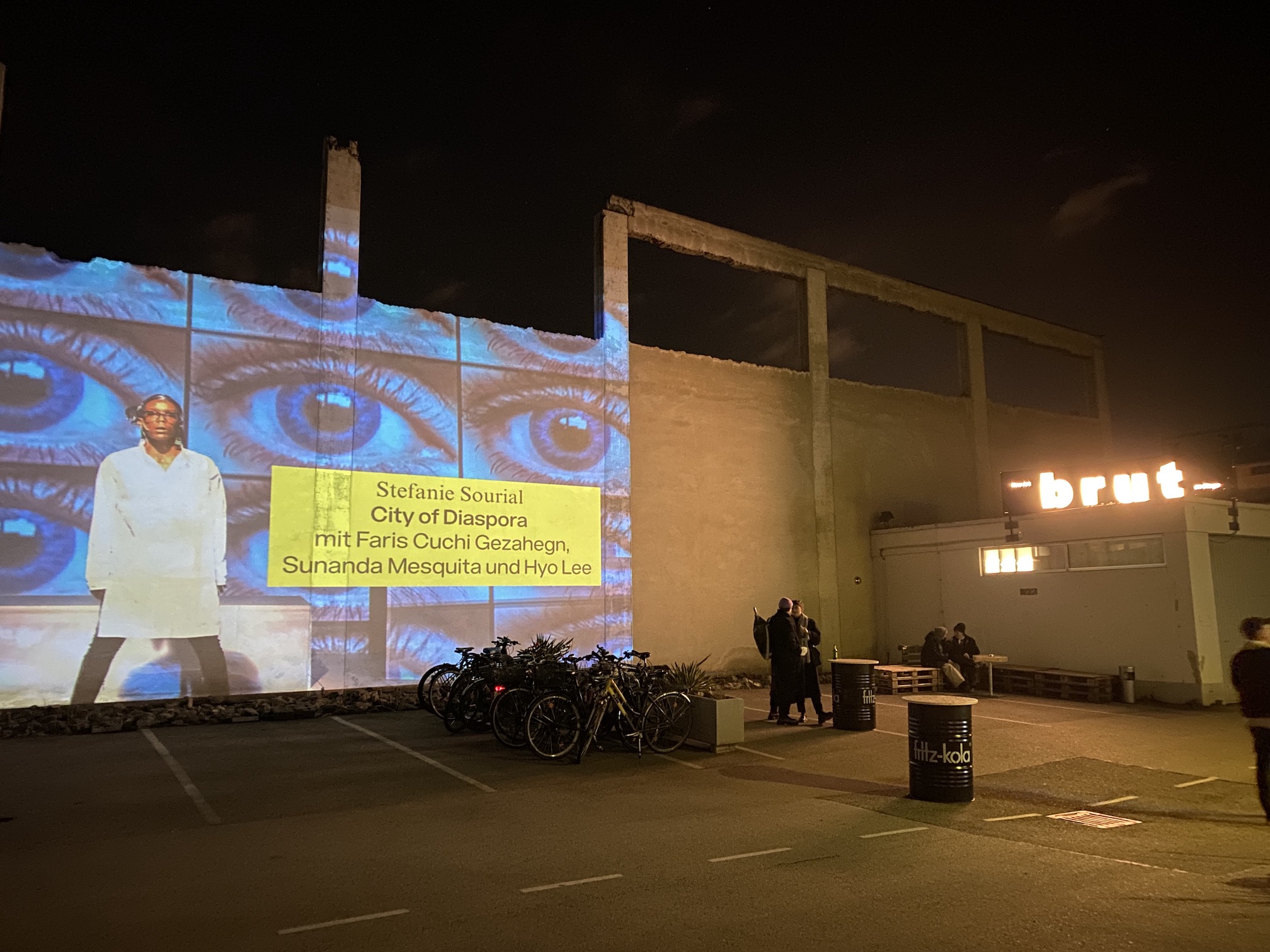 This was my first time in brut nordwest. It's near my house, and after literally taking a couple of steps in the street, I found myself in a different world. A pretty enclosed space with a sort of square in the middle. A large neon sign shines “brut”. On the half-demolished wall was a huge slideshow projection of the upcoming “City of Diaspora” performance. People were slowly gathering, everyone was excited. My colleague couldn't join me, and in a panic I called my friend to come quickly, since a second ticket had already been purchased. It was a full house, the audience was as diverse as a mix of the UN Cultural Summit and Milan Fashion Week. This density of diversification in one place is not an everyday experience in Vienna. 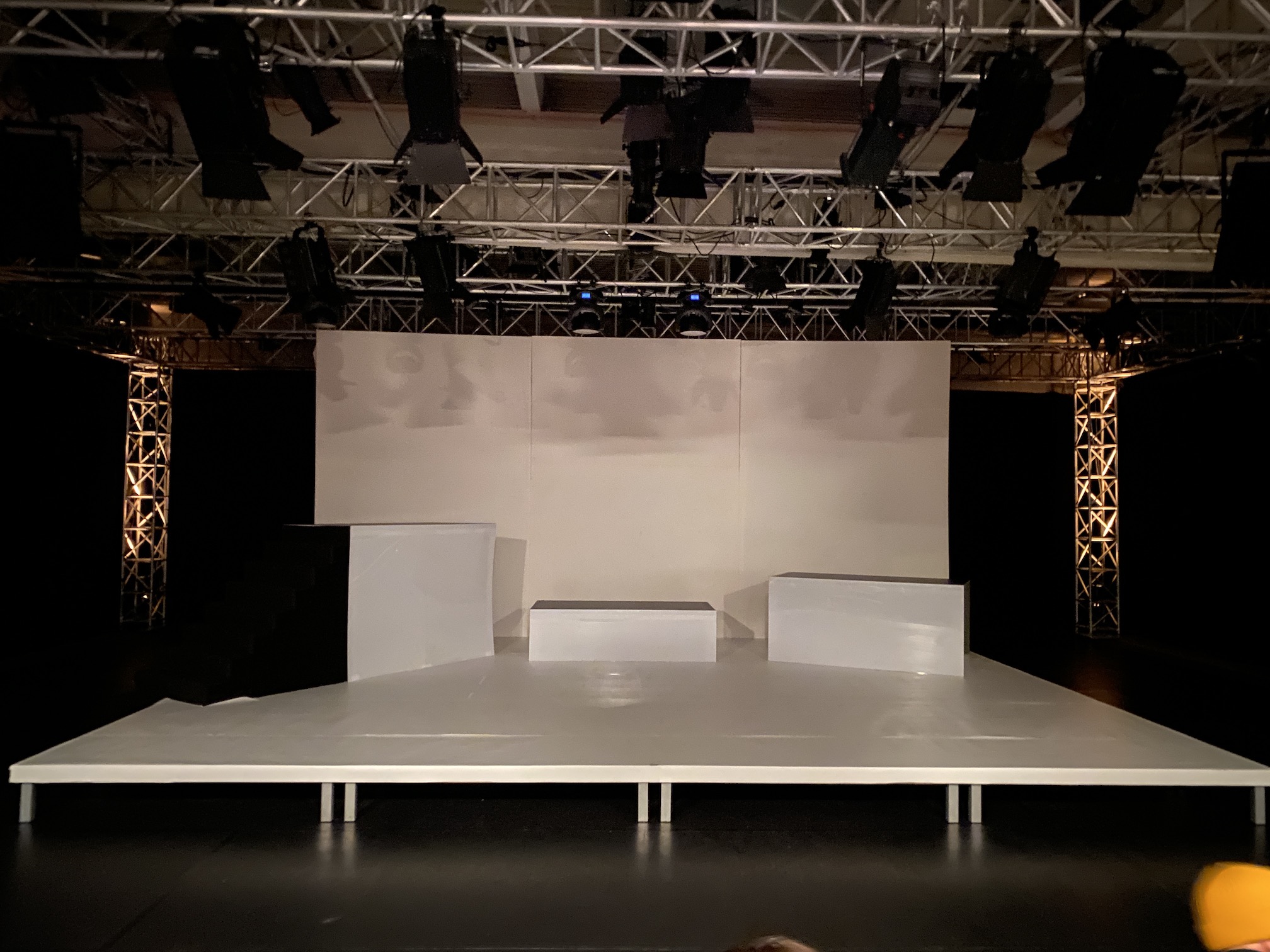 Upon entering the hall, there is a small stage. I look around and find no other alternative, and I feel a little disappointed because the preview photos featured a staggering visual background to all the action. The small stage and its background are minimalistic.
The lights go out, and Stefanie Sourial appears: she's wearing a black jumpsuit, she's spellbinding. She’s soliloquizing, and so she reminds me of an impresario of early 20th century theater productions – even the jumpsuit looks more like a tuxedo. Her incredible facial expressions accompanied by gestures are like a pantomime, but with a voiceover... The spoken words grab your attention, they describe in a direct manner the invisible city within the city, the City of Diaspora: "It is the loss of origin and identity. It is the gaining of identity and origin." Certain phrases resonate with me during the performance. Some get stuck in my head, and my own Sci-Fi plays out. Such as the words spoken by Hyo Lee: "They are OK, I'm visiting but they don't like me to stay". Faris Cuchi Gezahegn repeats like a mantra, like a spell "Do nothing without Intention", Stefanie warns: "No one leaves the house unless it is the mouth of the shark". These strong quotes are touching, and they set up a tent to live in my head during the performance. 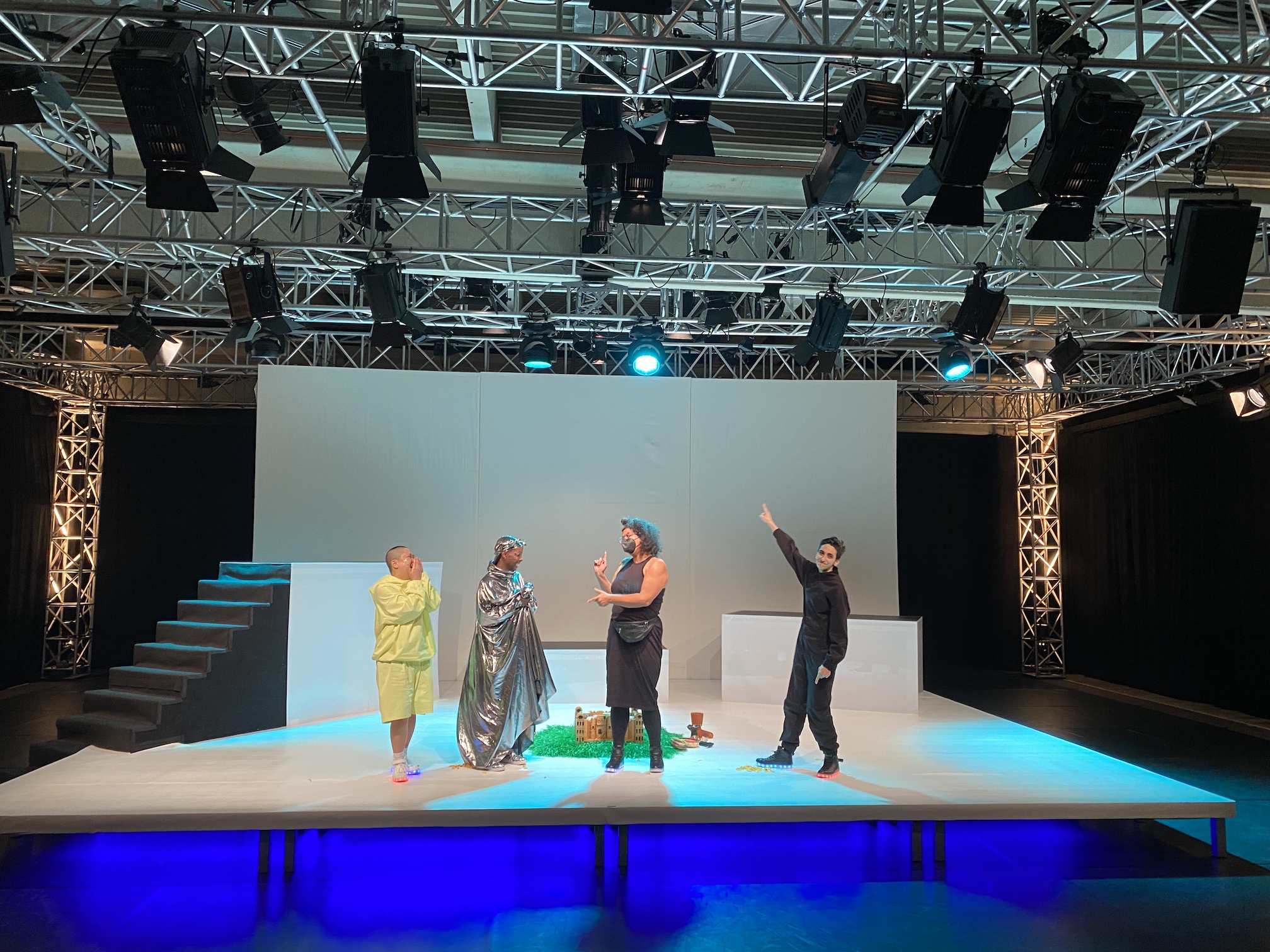 The imaginary stories performed by Stefanie Sourial, Hyo Lee, and Faris Cuchi Gezahegn were engrossing, witty, and somewhat ironic; at times sad, at times seasoned with a great sense of humor and some childlike curiosity. I laughed at the hilarious detective story in search of the lost Joy of pole dance. A childhood dream of becoming a shark really impressed my friend, and we both wanted to share Faris' ritual-like dance and the ensuing tea ceremony. Incidentally the stage had become big, so much was happening on it, and the background was a universe of many fantastic cities. The music was a connecting link, carrying the audience smoothly from one story to another. 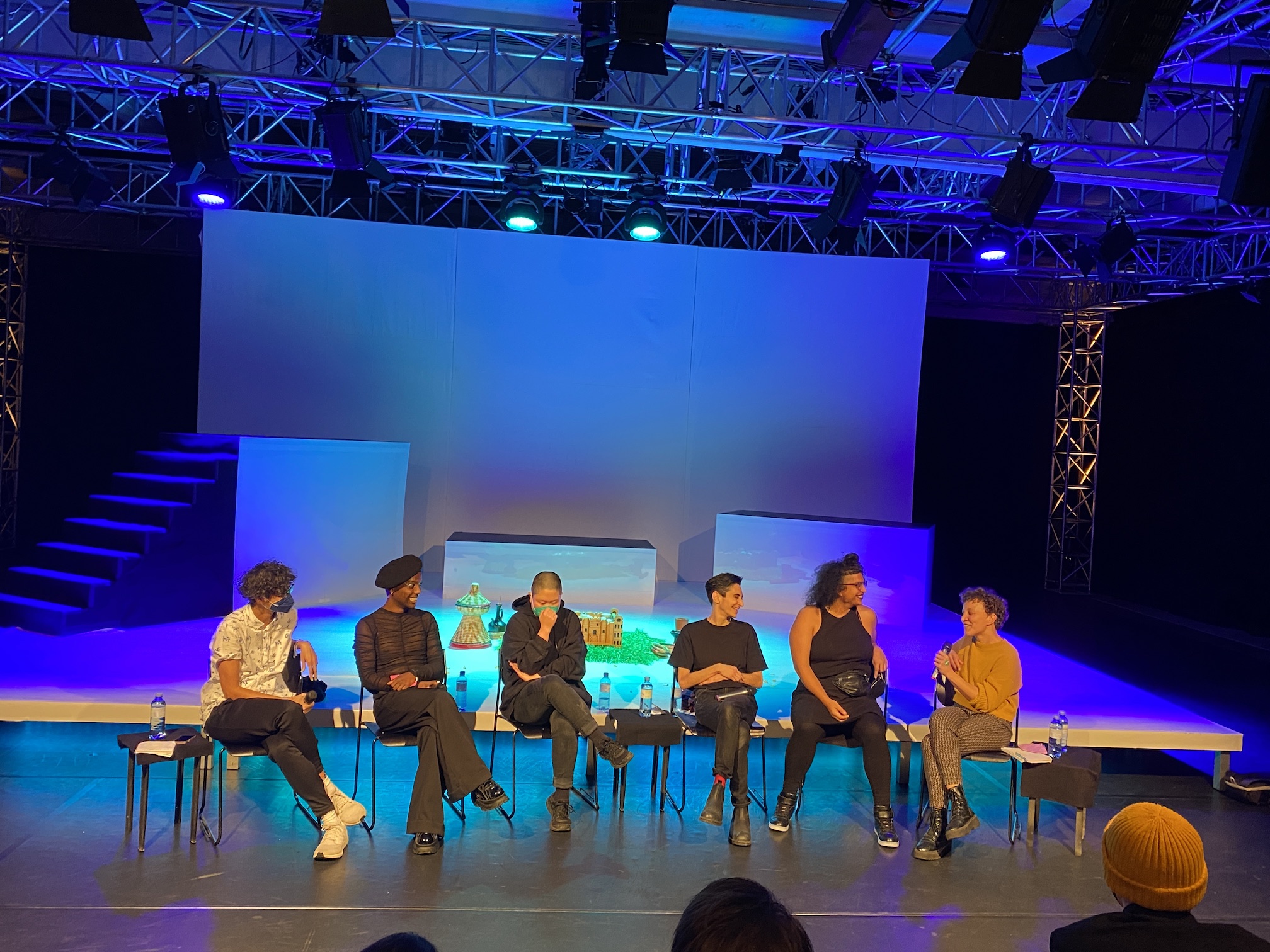 The performance was followed by an artist talk moderated by Janine Jembere and Sushila Mesquita. Creators and performers shared their stories of the working process from the idea to the realization of the project. Stefanie Sourial pointed out that the stories were drawn from their own experience of living in between worlds, and the main goal was to make this world visible.
Performers allowed themselves freedom: whenever there was an idea, they let themselves explore it. Hyo Lee talked about her thought of including K-pop dance in the performance, because she felt that foreign cultures are sometimes misused and even abused. Faris Cuchi Gezahegn shared that working on this project was an act of healing for them, as they had just arrived in Vienna at the time and were feeling the challenges of finding their place of belonging. The stories were akin to tracing their own memories and experience. Sunanda Mesquita noted with a smile that it was a big challenge for them to work on the visual mapping, it was a shared flight of fantasy.

On the way home, I discussed the performance with my friend. As a Person of Color, I felt connected to these stories, to these issues. My friend said it was the first time for him as a person born in Austria to experience diaspora through these stories. So I think the City of Diaspora became visible at least to those who attended the performance.